A Visit to the Cologne Cathedral

One of the most beautiful churches in the world
;
The Cologne Cathedral has a long pilgrimage tradition in Christianity, dating back to the Middle Ages. All of this because this is where you can find one of the most precious relics of Catholicism: the Shrine of the Three Holy Kings, which was brought to Cologne in 1164.

In German, it’s officially called the Hohe Domkirche Sankt Petrus. In English, Cathedral Church of Saint Peter. But most people are going to call it the Cologne Cathedral or the Kölner Dom. This fantastic church is Germany’s most visited landmark, with an average of 20,000 people a day. Also, it’s one of the tallest churches in the world.

I had visited the Cologne Cathedral for a brief moment back in 2015, once my train stopped in Köln on my way to Aachen. But I didn’t have the time to explore the church. In September 2016, Fotostrasse was invited to visit Photokina, and, finally, I had time to visit and photograph this beautiful piece of Gothic architecture. 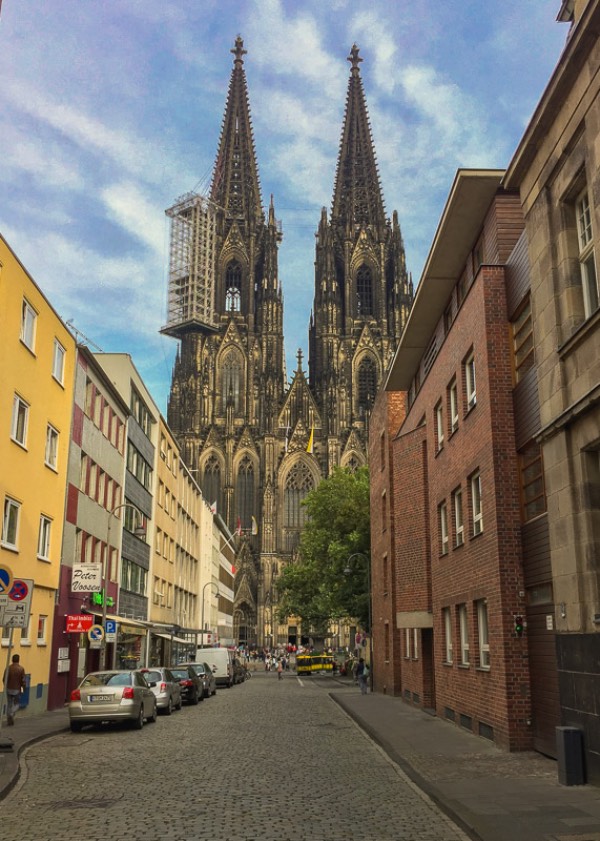 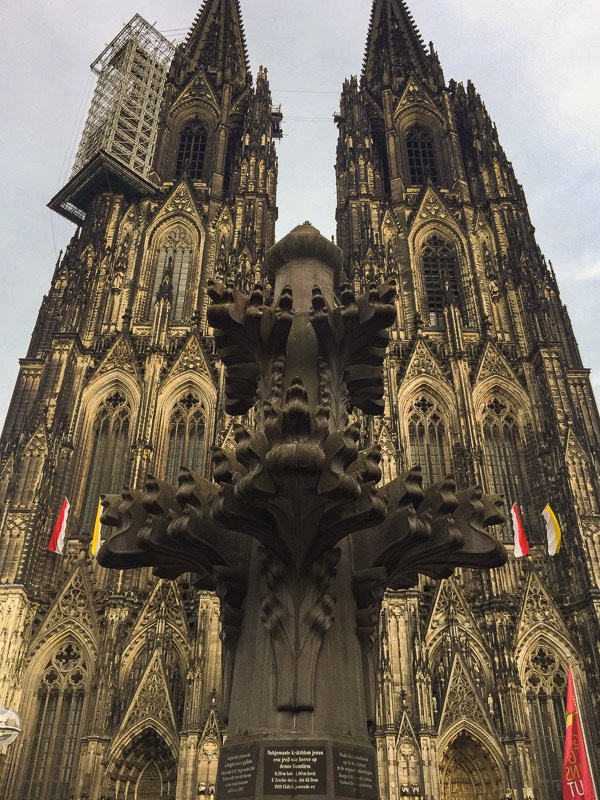 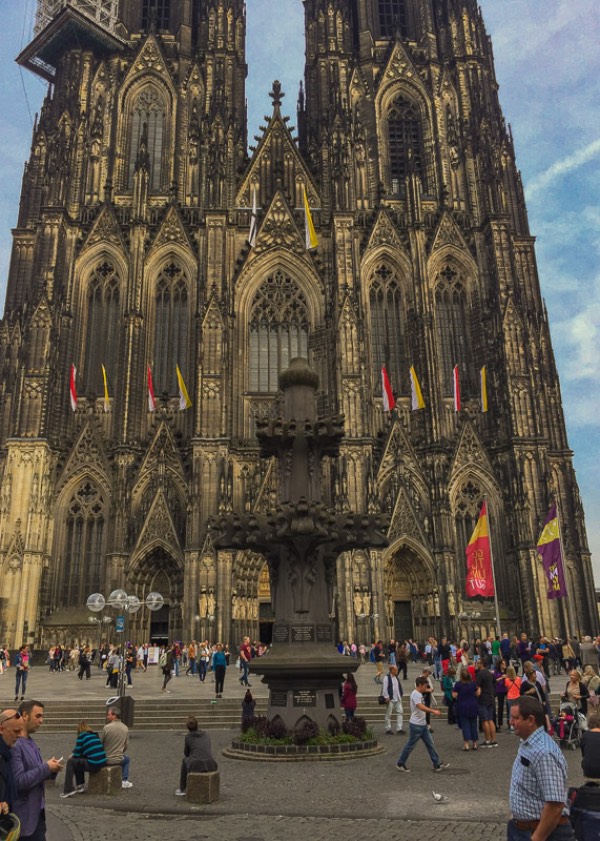 A Little bit about the construction of the Cologne Cathedral

Before there was the church, the area had been occupied by several previous structures, including a Roman temple built by Mercurius Augustus. From the 4th century onwards, the cite was occupied by Christian buildings. But the construction of the Cologne Cathedral only started in 1248.

But the reason for the cathedral dates from a century before. In 1164, Rainald of Dassel, who was the Archbishop of Cologne, acquired the relics of the Three Kings. Since these relics had great religious significance, it drew pilgrims from all over Christendom, and it was important for the church to properly house them, and this is the reason why the Cologne Cathedral came to be.

The foundation stone of the church was laid on August 15, 1248. The eastern arm of the building was completed first and consecrated in 1322. The western division of the Cologne Cathedral ceased work in 1473, and, because of this, the south tower wasn’t completed and, in its place, a considerable crane remained in place. A landmark of the Cologne skyline for over 400 years!

The eastern part of the building was ready, the western part wasn’t and the central part of the Cologne Cathedral, the nave had some work done, but everything stopped in the 16th century. It was only in the 19th century that enthusiasm for the Middle Ages created some commitment to continue with the construction of the Cologne Cathedral. The cost was split between the Prssuain State and the Central-Dombauverein, a civic effort that raised more than two-thirds of the money needed to complete this magnificent church. 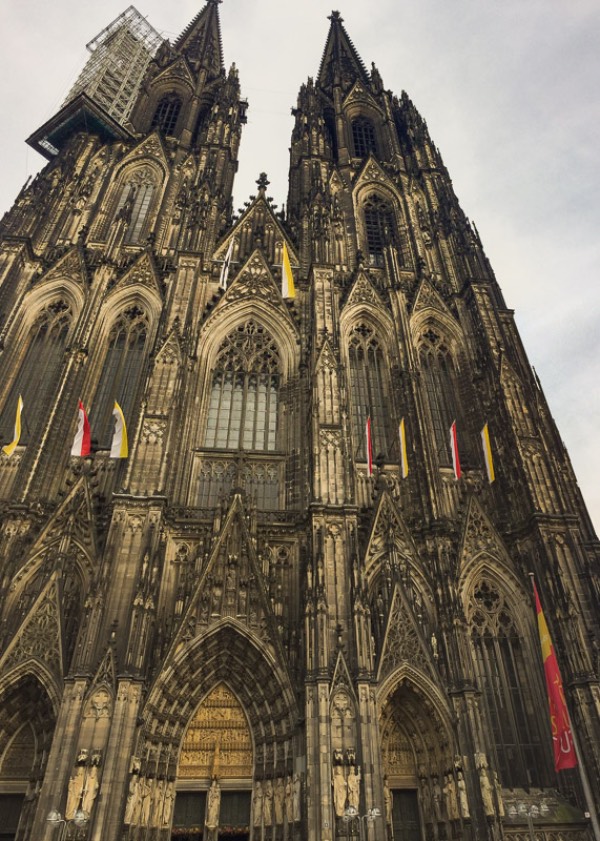 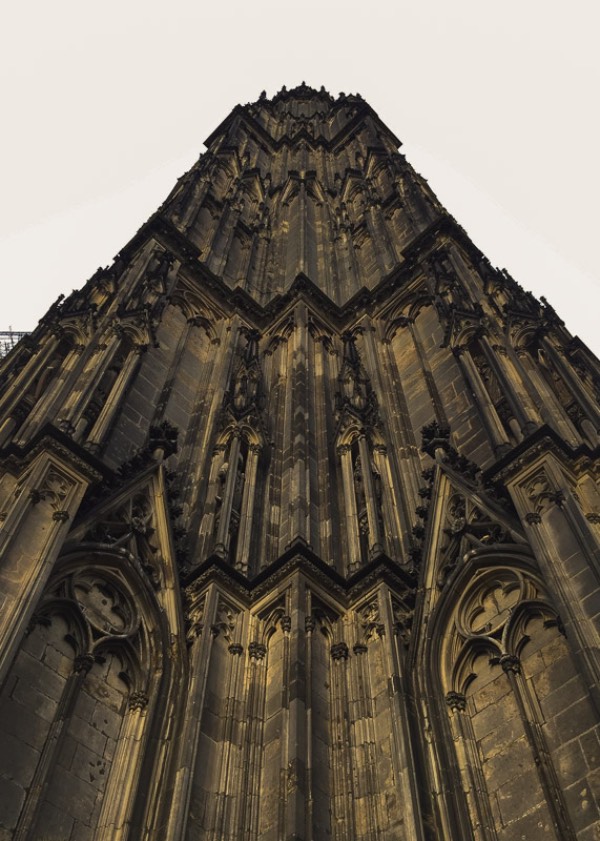 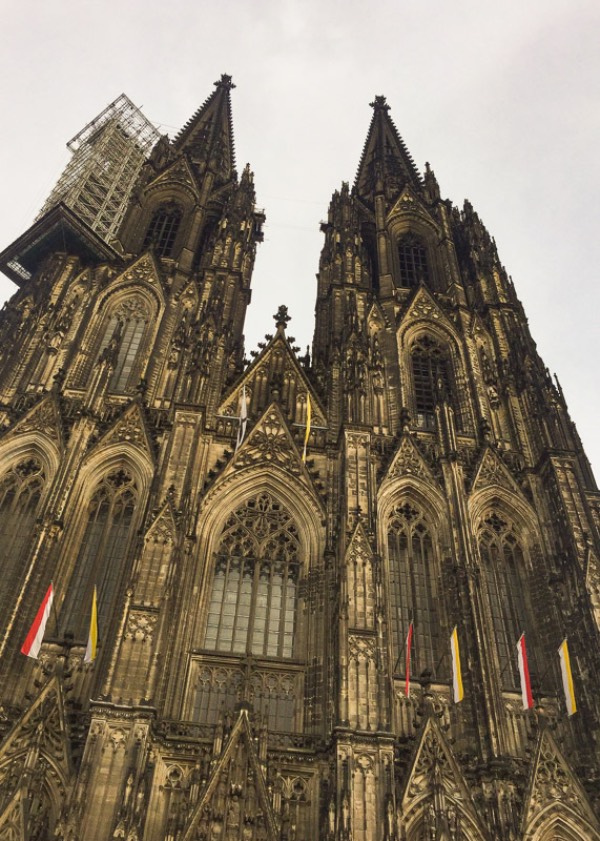 With the surviving medieval plans and drawing at hand, construction work resumed in 1842. The nave and the tower were added, and the bell was installed in 1870. On August 14, 1880, 632 years after construction began, the largest cathedral in Germany was opened to the public. The celebrations were attended by Emperor Wilhelm I, and, for a few years, it was the tallest building in the world.

During the Second World War, the Cologne Cathedral suffered 14 hits from aerial bombs, and it was severely damaged. But it remained standing even though the city was flattened around it. I believe that the Allied Forces considered it to be an essential navigation landmark, and they didn’t put much effort into destroying it.

After the end of the war, the Cologne Cathedral was restored in steps. From 1956 until 2005, there was work being done to bring it back to its former glory days. Even when I visited the place, back in September 2016, there was some construction work being done in one of the towers.

In 1996, the Cologne Cathedral was added to the UNESCO World Heritage List of culturally significant sites. This Gothic masterpiece of Christian architecture is a witness to the history of Köln and to Germany. 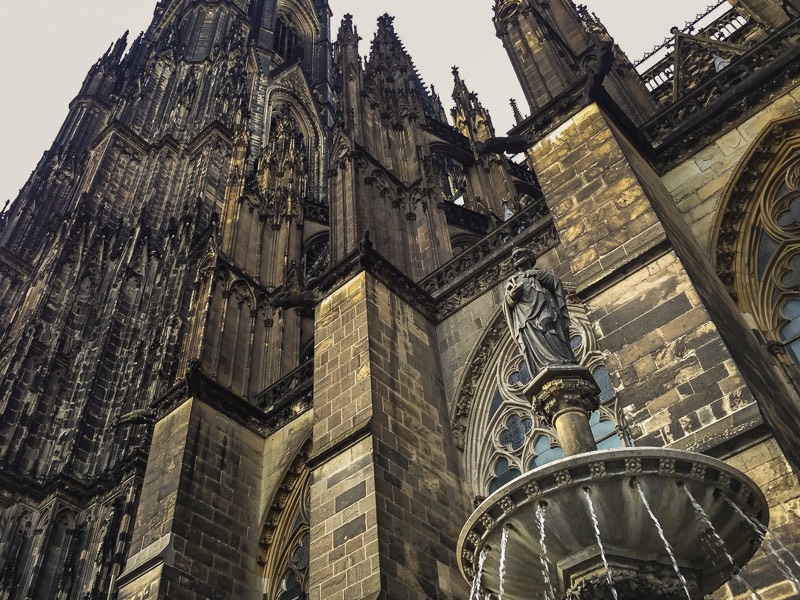 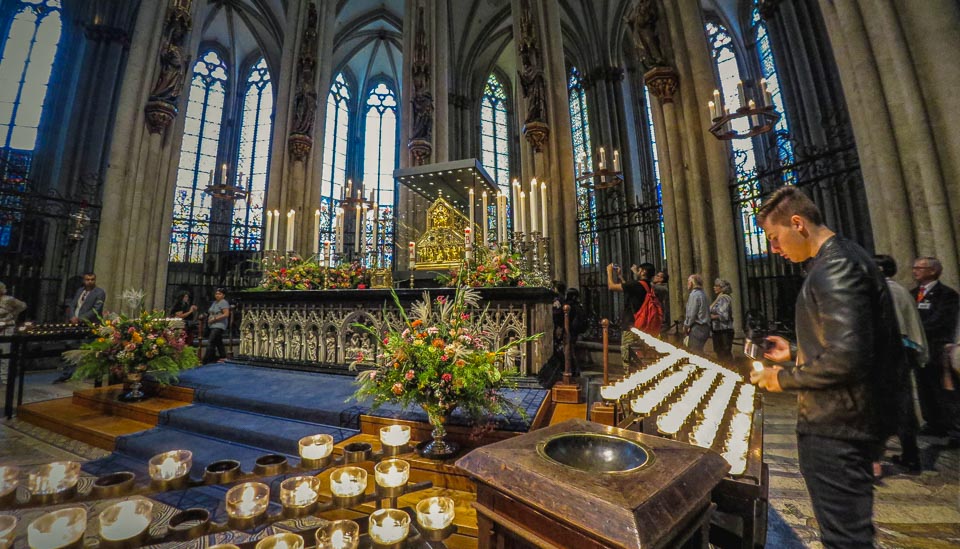 The Architecture of the Cologne Cathedral

When it comes to architecture, the Cologne Cathedral owns a lot to the Amiens Cathedral since its ground place and style was the reference point in the construction. As it’s usual in Gothic cathedrals, the shape of the building is designed to resemble a Latin Cross. And, with two aisles on each side, it helps support one of the tallest Gothic buildings in the world.

Inside the building, the style is more closely related to the 19th century. Different from other churches, there isn’t much painting decoration inside, but this doesn’t mean it’s less gorgeous. The glass windows that you can see in there are called Bayernfenster and were a gift from Ludwig I of Bavaria.

Also, you might be thinking that the Cologne Cathedral is black, but it isn’t initially like that. It appears to be like because this is where dirtiness has accumulated. This is how sandstone reacts to the sulphuric acid in polluted rain, and it’s the reason why the building looks so dark. If there was an effort to clean it up, it would go back to its original color, but I don’t know how people would react to it since most are already used to the dark colors. 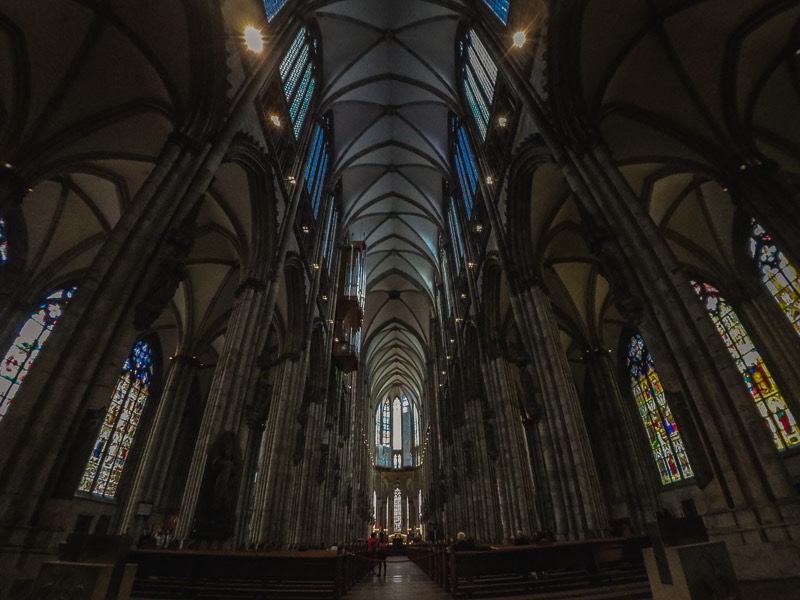 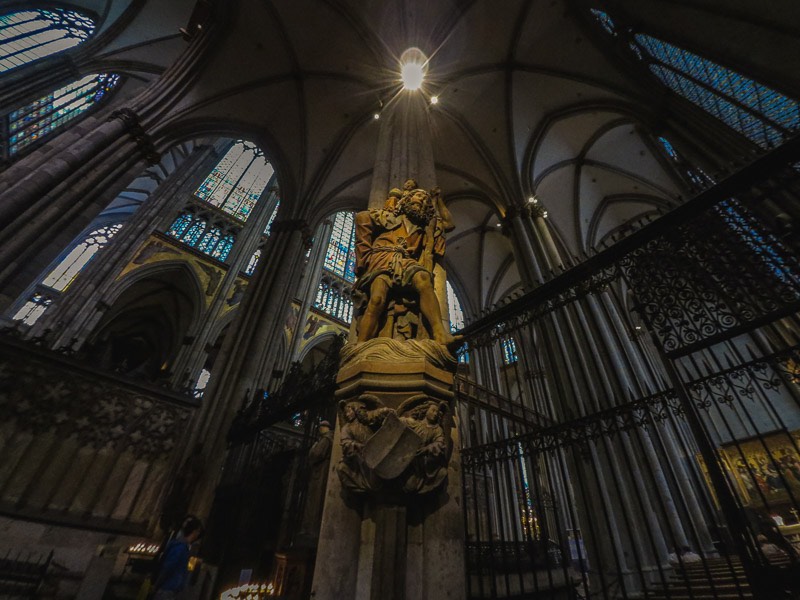 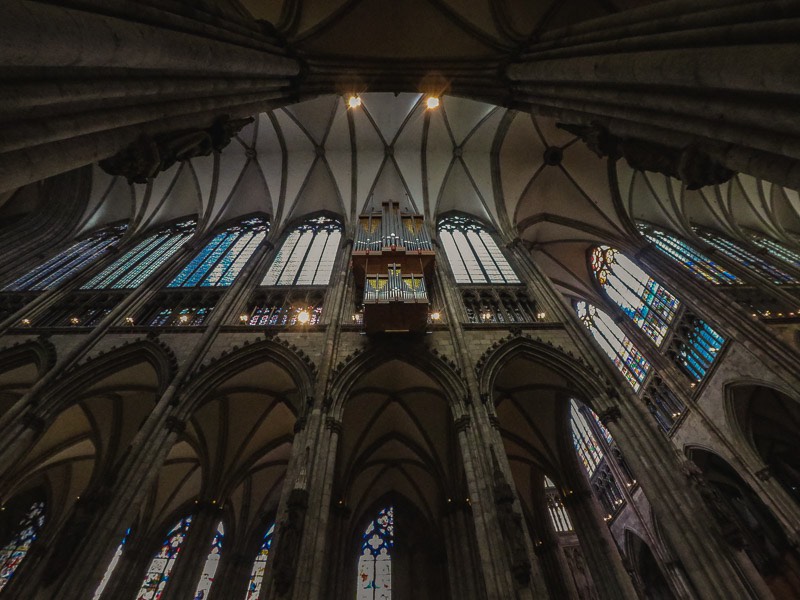 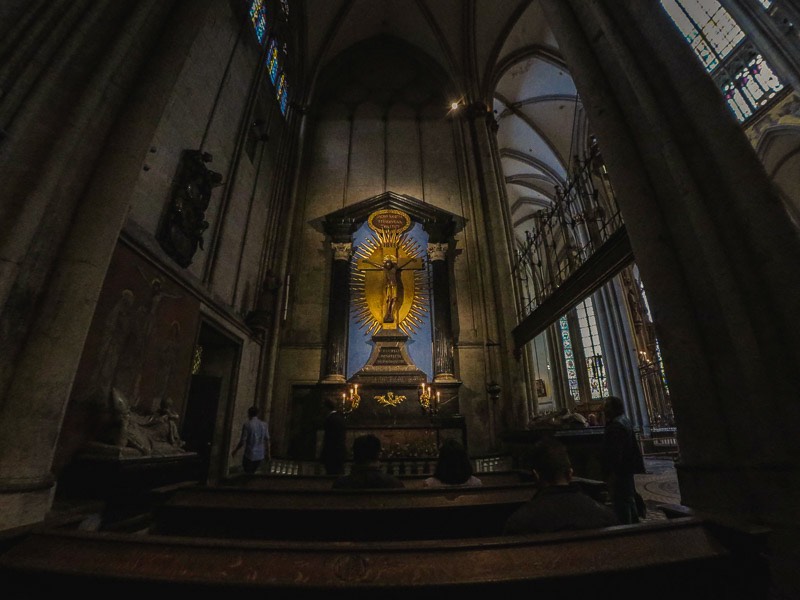 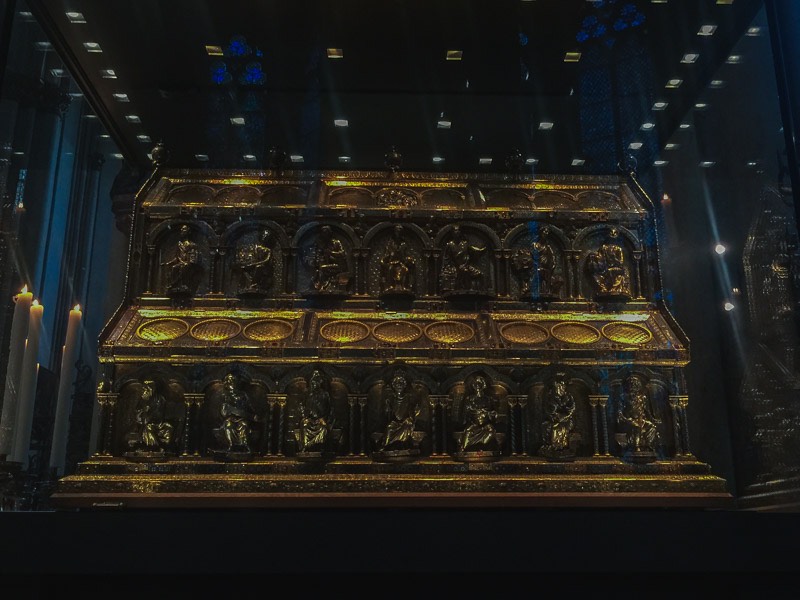 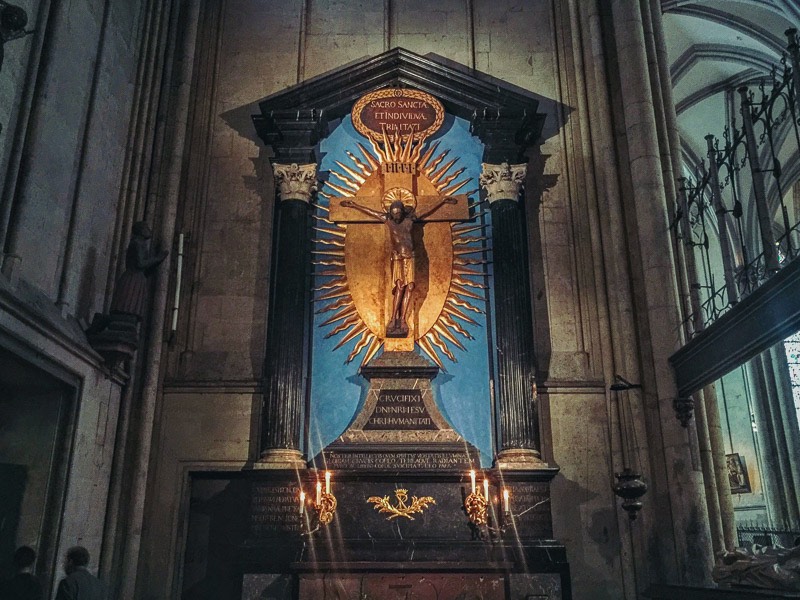 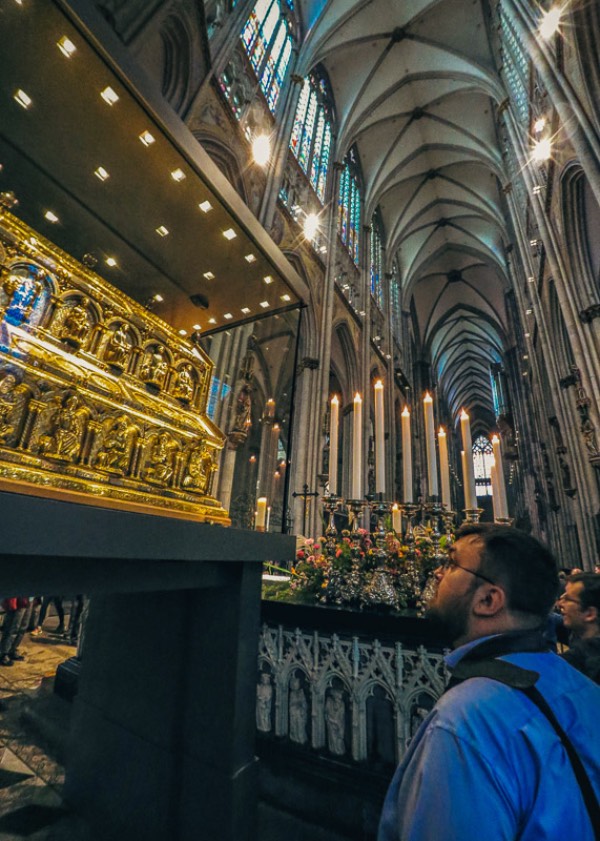 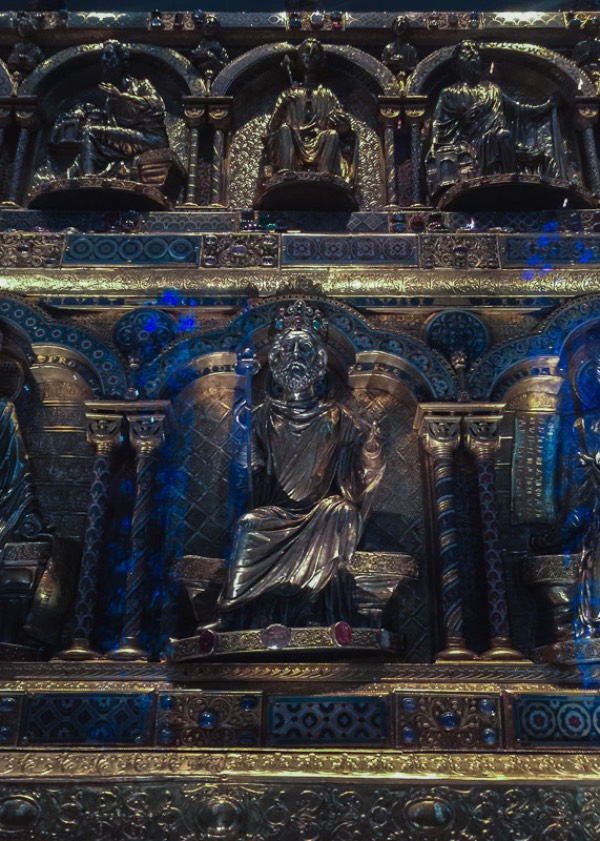 What should you look for inside the Cologne Cathedral

As I said at the beginning of the article, the Cologne Cathedral is a pilgrimage location for Christian around the globe. Due to its treasures, it became the most visited tourist destination in Germany, but if you don’t know what to look for inside the church, this section is for you.

One of the highlights of the Cologne Cathedral is the gorgeous High Altar that was installed back in 1322, and it’s made of black marble. But the most celebrated treasure in the church is the Shrine of the Three Kings that was commissioned by Philip von Heinsberg, archbishop of Cologne from 1167 to 1191.

It’s believed that inside the Shrine of the Three Kings are the remains of the Three Wise Men, whose relics were acquired by Frederick Barbarossa in 1164. The shrine has the shape of a basilican church and is made of bronze and silver, with gilded architectonic details. It’s the most significant and most crucial reliquary of the Middle Ages.

When you enter the Cologne Cathedral through its southern portal, there is a statue there to greet you. Called St. Christopher, this statue has been greeting pilgrims since 1470, and they would thank the saint for their safe arrival in Köln after their journey. Saint Christopher is the patron stat of the travelers, and he is carrying Christ as a child on his shoulders.

Near the sacristy is where you can find the Gero-Kreuz, also known as the Gero Crucifix. This is the first monumental sculpture of the crucified Christ still in existence. It was donated by Archbishop Gero in 976, and it has been in the same spot since 1360.

If you are like me that likes to look for the unusual in buildings like this, don’t forget to pay attention to the ground where you are walking since there are beautiful hand made murals on the floor. Also, there are two pipe organs by Klais Orgelbau inside the Cologne Cathedral, one from 1948 and another one from 1998. 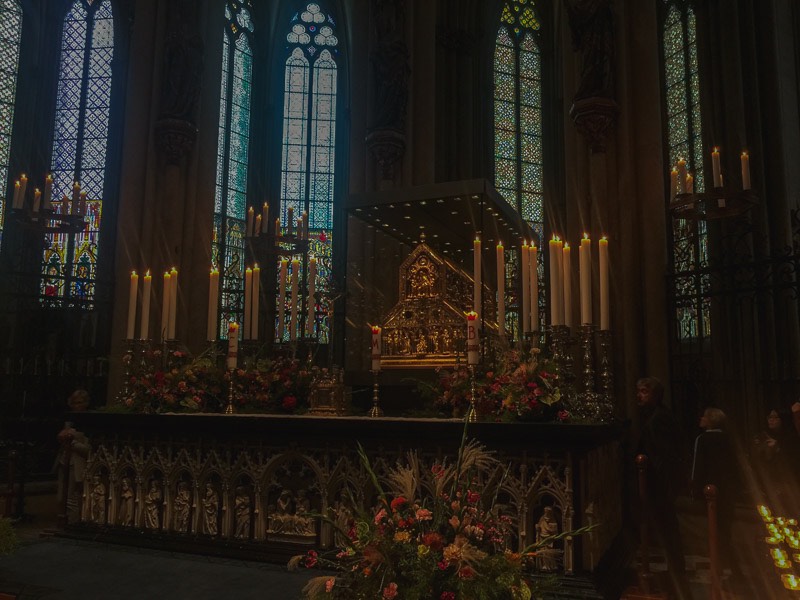 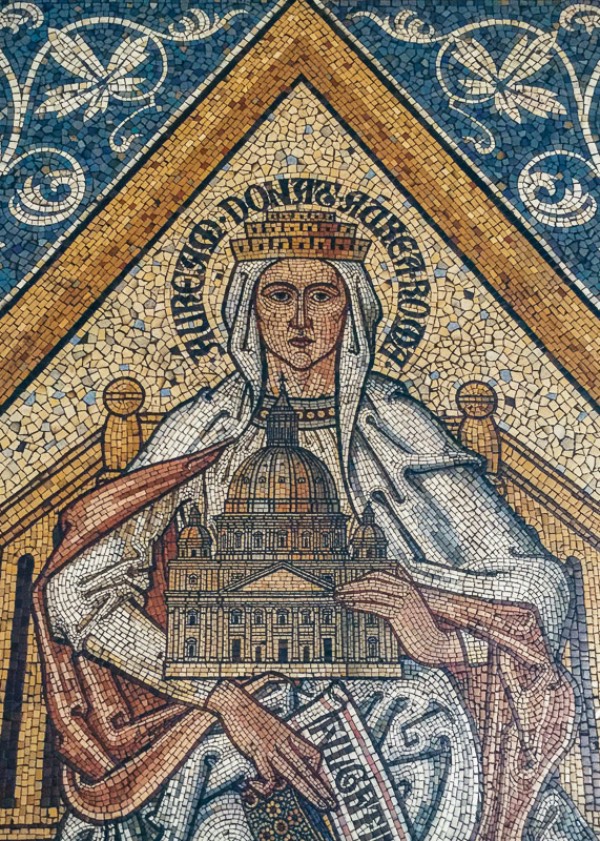 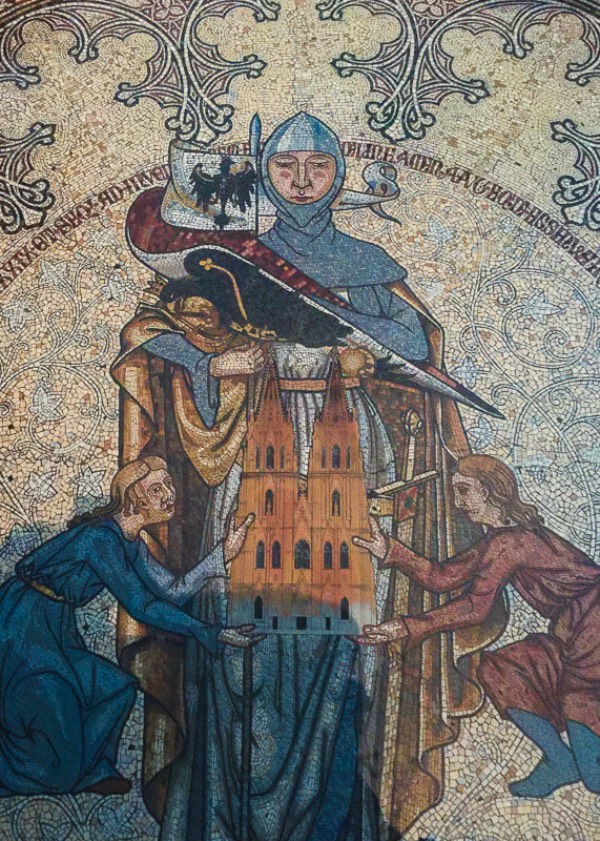 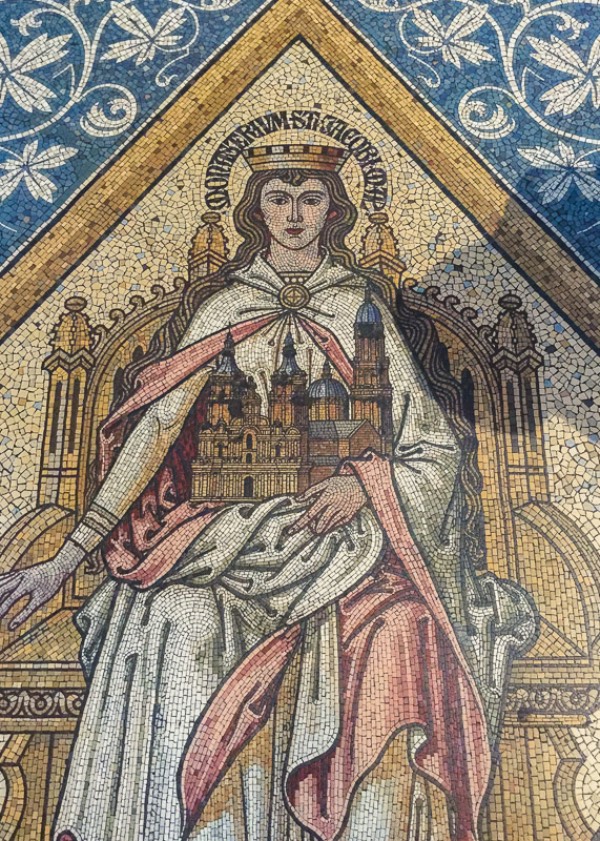 How to visit the Cologne Cathedral

If you want to visit the Cologne Cathedral, admission is €3. You can also climb the tower and visit the Treasure Chamber for €6 each, but I didn’t have enough time to do so. There are guided tours in English from Monday to Saturday, and the price is €8 for each adult. If you need to know more about how to visit the church, check out their website. 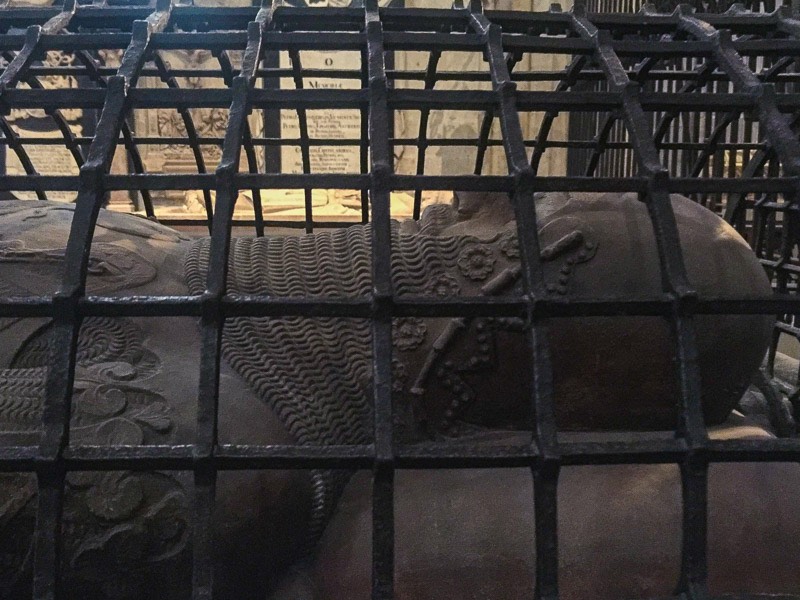 We are back in #Berlin already but there are so many cool pictures of the Cathedral in Köln that we had to post again. #fotostrassegoestokoln

The Cathedral in Cologne is one of the most amazing buildings we ever saw. We could stay outside for hours just looking at all the details of its towers. #fotostrassegoestokoln #fotostrasse #vscocam #travel

On our last day in Köln we finally managed to find the time to visit the amazing Cologne Cathedral. If you are ever in the city, you need to go there. #fotostrassegoestokoln #fotostrasse

A Visit to the Magnificent Cologne Cathedral