A guide to Manchester Bands and music history

Punk, Post Punk, Brit Pop.. You name it, Manchester Has it.
Manchester is home to some of the most successful bands in England’s music history. The Bee Gee’s, Smiths, Oasis, Joy Division are some of the few names of the vast list of Manchester Bands. Throughout the history of music in England, there are a lot of famous manchester bands.

What a better way to experience the city of Manchester other than going to all the iconic places for all those Manchester Bands?

Some of the best spots for Manchester Music

Craig Gill holds one of the best music tours I’ve ever been part of. In just 1 afternoon he took me to see important places for the Manchester Bands I love the most. Craig is the drummer for Inspiral Carpets, one of the notorious bands from Manchester. He knows what he’s talking about it.

I went to see the building where the Buzzcocks used to have their office, the legendary Salford Lads Club and the building where Noel Gallagher lived before the his fame. I saw many other spots too, but those ones were my favorites.

I also learned a lot about the history of Manchester Musicians like the fellows from Joy Division and important places like The Haçienda.

With loads and loads of information about the bands he personally knew and places where he used to hang out, Craig made me love Manchester in just a few hours.

Another fun fact I have to add here for the Oasis fans reading this: The name Oasis came from a Inspiral Carpets’ poster. And Noel used to be the band’s roadie. So it is like having a tour of one of the most fantastic cities with a personal friend of one of the best bands from Manchester.

Here’s a map and photos with most of the locations Craig took me but please, do contact him for a full tour. It is outstanding and by far the most interesting thing I did in a long time.

The Northern Quarter and the record shops

After I left Craig, I headed to the place where I liked the most to walk around: the Northern Quarter.

The old red brick industrial buildings contrasting with the young hip business all over was too good of a combination to let it slide.

It looks like a old New York atmosphere meeting the crazy street art of London. Plus the Manchester accent that make things just way more fun. And I’m not lying about the back in the days NYC vibe, ok? Many major blockbusters used this area of Manchester to recreate what New York used to be. The alleys, the fire exit stairs, the smoke coming from nowhere… Manchester is so versatile.

Besides, all the record shops in this area… So good! This area holds the most amount of record shop by square meter in the whole city. Titles goes from the good old punk rock, passing by Brit Pop all the way to electronic and so on. And if you love vinyls, this is the place for you! All the stores I’ve visited had a super large collection of vinyls.

Reserve a whole day for this area of Manchester. And please have lunch or dinner while you’re there. The Northern Quarter is filled with cool, young and hip new restaurants waiting to be tested by you. Good food, great beer and awesome environment.

My brief visit to Manchester happened because I went to see the super cool Manchester Punk Festival.

This year the line up had big names like the Flatliners, Bouncing Souls and Oi Polloi.

I will admit here that my 16 years old self was so happy to finally see Oi Polloi live that I cannot put into words here.

The festival itself was a super fun and different experience for me. It was my first time going to a music festival that happens inside a city. So all those bad sides of going to music festivals you can forget about all about it. No camping, no walking 190 kilometers to go to the toilet, no overpriced and bad festival food, no stay without a shower for 3 days because you refuse to shower in front of 50 men… No nothing of that kind.

I got a hotel near the main train station and it was a 15 minute walk to the venues, I slept in a super nice bed, I had time to explore Manchester.. It was fantastic.

Besides, since it is a small festival, there’s not even a single band that I had to miss.

Manchester Punk Festival started a few years ago doing its concerts in just one venue but now the festival is held in 4 different ones. And each of the venues are just a few meters from each other. And I mean it. Sound Control, The Thirsty Scholar and Zombie Shack are in the same place basically. The 4th venue, Zoo, was 2 blocks down.

Everything close, everything easy, loads of information everywhere and super well organized. Everything that I like in a festival.

My favorite part of the festival was of course when Oi Polloi played, but I got to know so many bands that I genuinely liked.. The Pale Angels, Brassick and Throwing Stuff are some of the names you guys need to check it out.

But if you’re going not going to Manchester in time for this festival, I gotta say that the amount of posters and flyers on the streets were something else. The city thrives on its music past and offers loads of space for the new names.

I think I saw at least 3 or 4 gigs happening on all the days I was there. I’m pretty sure that opportunities for live music will not be a problem you’ll have to face it there.

So, if you got inspired by this post to travel to Manchester or if you want to add some information, please leave a comment below. But if you’re shy, we also have our facebook group. You can talk to us (and other travelers) there. Bring your questions, stories and suggestions. 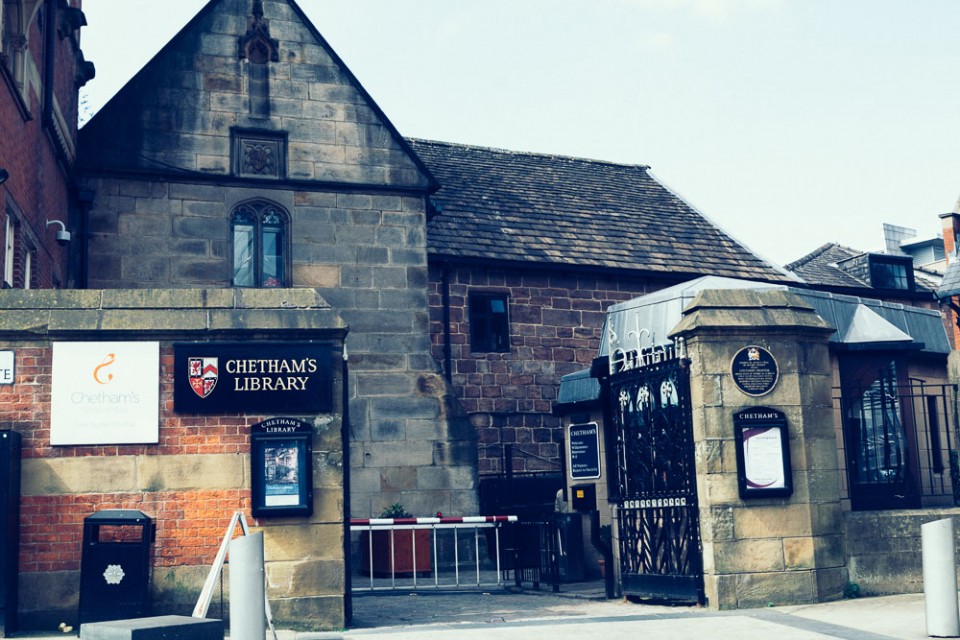 The start of communism: Chetham’s Library