Christmas Horrors in the South of Germany with Krampus


They might look scary to some people, but we find it surprising. The Munich Krampuslauf tradition happens every year around the Christmas Markets in Munich in the Marienplatz, and it’s another excellent reason for you to visit this fantastic German city in the winter time. For more reasons, check our post about winter activities in Munich during winter.

Krampus is one of the many reasons why we went to Munich in early December 2017. We already had seen the original Christmas tradition in Austria a while ago, but we needed to see it again and film the video that you can see below!

Munich Krampuslauf and The Krampus Tradition around Munich

If you never heard about Krampus before, we are here to introduce you to this tradition in a natural way. Krampus is the scary assistant from Saint Nicholas. If Santa Claus often ignores the naughty acts of children, Krampus doesn’t and comes before Christmas to punish those who didn’t behave well throughout the year. Krampus went through the streets of Munich to terrify these children and didn’t act well, and they do this in such an exciting way that a crowd of people gather around them to see it happening.

Krampuslauf is the name of the run that Krampus does before Christmas, and it’s a tradition that dates more than 500 years. It started in the Alpine Region between Austria, Germany, and Switzerland and it still exists today. In Munich, Krampus was first found in the 16th century when school teachers of the Frauenkirche and St Peter’s church went to the streets and caused so much terror that the police had to be brought to contain them. Since then, it is a tradition on the streets to have the Munich Krampuslauf every year.

The Munich Krampuslauf happens on two different dates but it is better to check beforehand before booking your tickets, since the year we went (2017) didn’t happen on the 6th of December and instead was on the 10th and the 17th of December, we believe that the event follows more the weekend rather than the actual Krampus day like in Tirol, Austria. Our last time, near Hall in Tirol, the Krampusnacht happened on the 5th of December, one day before the day of Saint Nicholas.

For us, one of the most exciting parts of this tradition is the beautiful and elaborated costumes that are used by everyone at the Krampuslauf in Munich. If you pay attention to the masks used, there is a difference in the number of horns that are used. When there are two horns on the mask, it’s a Krampus. When there are between 4 and ten horns, it’s a Perchten, a beast that is supposed to drive the winter away.

These costumes are not cheap to produce, as you can imagine. And they cost from 1.800€ to more than 2.500€. But the price might solve the least essential problem here. The most significant issue is the weight of the costumes, sometimes going to more than 10 kilos, only on the mask! This is the reason why, after Krampuslauf is over; you can see some people removing their costumes and trying to catch their breath and relax for a moment.

If you want to see Munich Krampuslauf, you need to go there during the second weekend of December and look around the Christmas Markets. The event is free and very kids friendly. In fact, we saw loads of them there.

And for you interested in going to Munich, either for the Munich Krampuslauf and the Christmas Markets or during the summer, at the beginning of our video, we recommended the cutest hotel in Munich and its name is Laimer Hof Hotel. This hotel is just a few meters away from the Nymphenburg Palace and the looks of it are to die for.  It is a very Bavarian vintage house in a splendid and cute part of Munich with easy access to every single attraction. Besides, winter or summer, nothing better than a walk on a royal garden, right? Follow this link and book your stay if you’re heading to Munich. Laimer Hof is perfect for families and for couples. It is very romantic, unique and completely the opposite of those chain hotels with no soul. You won’t regret it. 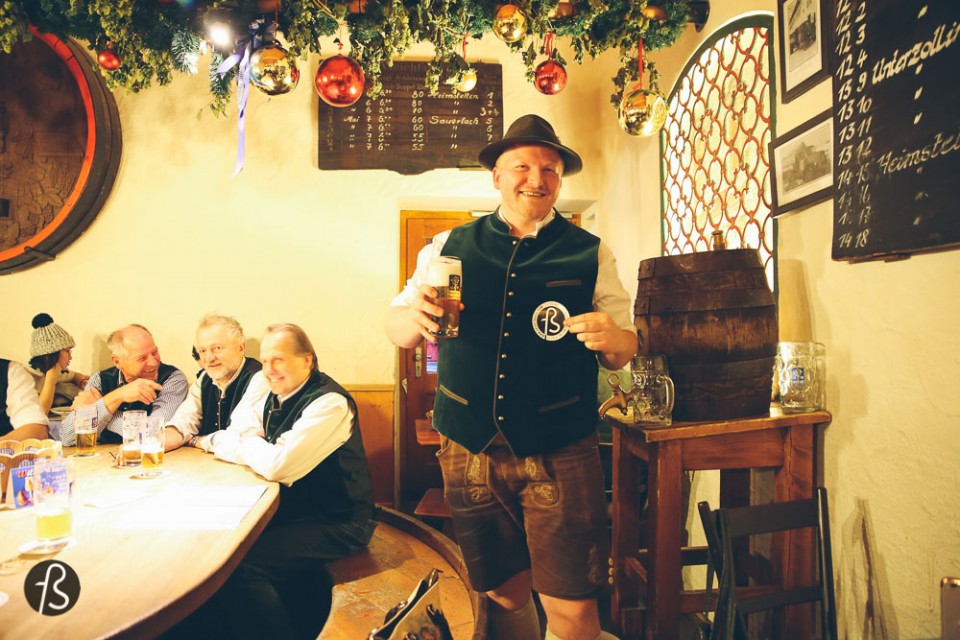 More than enough things to do in Munich in winter​