An Afternoon in Bratislava

How can you spend a great afternoon in the capital of Slovakia
;

When we went to Vienna for a week, we knew we would spent at least an afternoon in Bratislava. The capital and largest city in Slovakia is less than an hour away from Vienna. Since we needed to add another country to our ever growing list of countries, we decided to visit it. You know how these things go.

But we have to say that an afternoon in Bratislava wasn’t enough to see everything we wanted to see. The city may be small but there is a lot happening between the cobblestones streets that form Old Town. At least, we managed to see a lot in those hours in Bratislava.

Below you can see what the things we did in an afternoon in Bratislava. 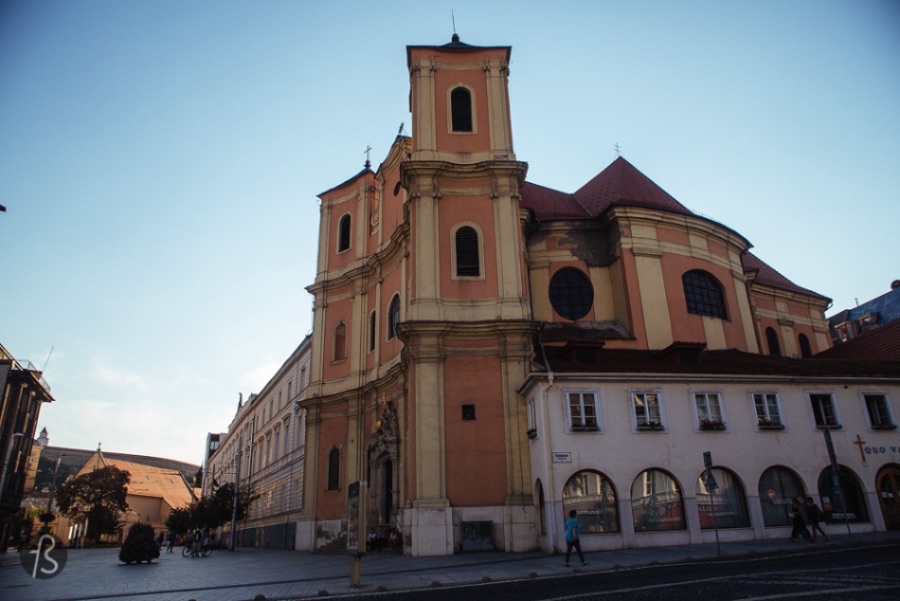 But, first things first, what is the deal with Bratislava?

Bratislava is the largest city in Slovakia and, since 1993, it’s also the country’s capital. It has a population of a little over 400 thousand people and you may ask yourself where are those people once you wander through the streets outside the city center. The city sometimes feels a little empty. We are not sure if it was the summer day or what but this is how we felt like.

The currency there is the Euro since 2009 and it we thought it would be a really cheap city to visit but we were wrong. We are not saying it was expensive but we were expecting Bratislava to be cheaper than what it was. Something we learned while there. 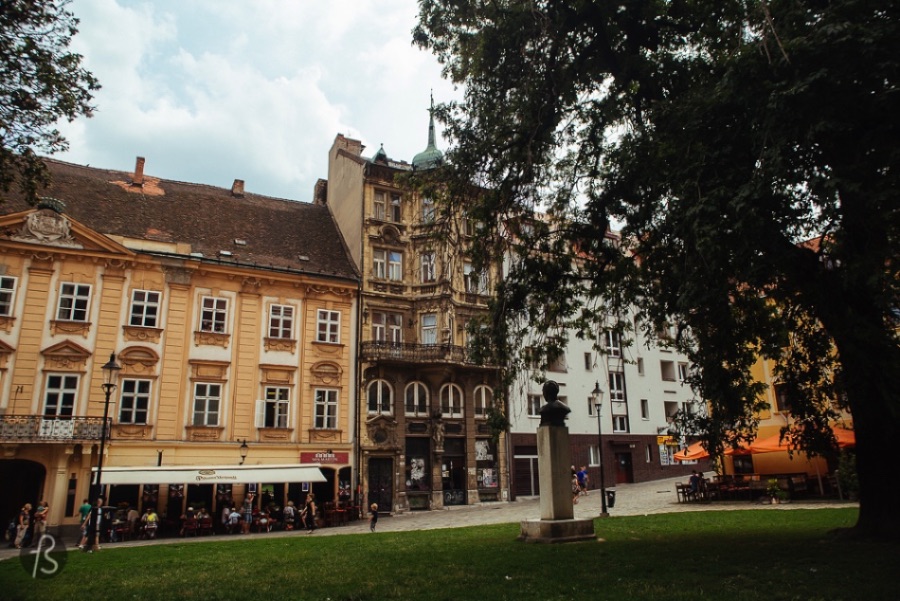 Something else we learned there is that the Slovak language is everywhere and it seems that they don’t care that much if you don’t understand it.

We didn’t have any issues with that but we decided to avoid any museum after we couldn’t find anything at the Bratislava Castle that was written in anything else than Slovak. We if need to complain about anything, it is the lack of support for people that don’t get the Slovak language. But we had fun either way.

Five Things to do in Bratislava in an Afternoon

The sightseeings below are mentioned in the order that we visited them. If you want to see Bratislava in the way we did, you should add the places below into Google Maps and walk from one to the other. Bratislava seems like it was made as a walking city and you are going to see that while walking everywhere.

So, lets tell you what you should see in Bratislava.

Michael’s Gate, also known as Michalská brána, is the only city gate that has been preserved from the medieval Bratislava. It was built around 1300 and its present shape comes from the baroque reconstructions it went through in 1758. It used to be the way to enter the city from the north and it got its name from the St. Michael church used to stand in front of it. 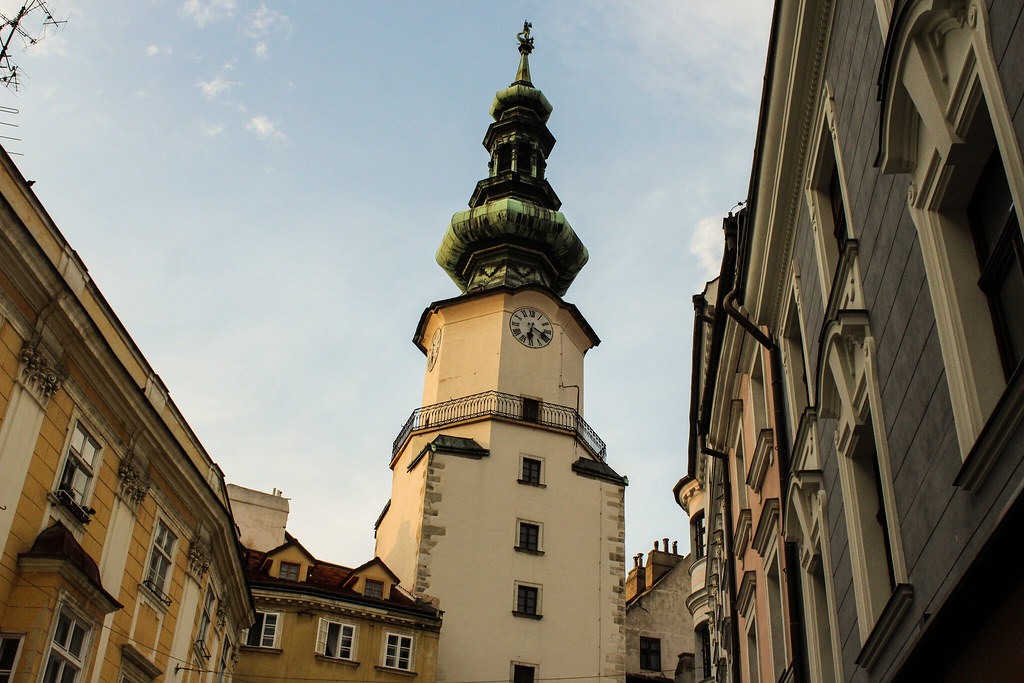 Nowadays, Michaels’ Gate is surrounded by luxury shops and restaurants. But inside, everything is a little different since it shows the history of this medieval fortification. You should go to the 6th floor to see a beautiful view of the surrounding areas.

The tower looks kind of displaced when you think about the shops around it. But, if you ignore that, you can close your eyes and imagine how Bratislava looked like a few hundred years ago.

St. Martin’s Cathedral, also known as Katedrála svätého Martina, is one of the largest and oldest churches in Bratislava. The place is known for being the coronation church of the King of Hungary between 1563 and 1830 when Bratislava belonged to the Kingdom of Hungary. This was a long time ago and this is how old this church really is.

Together with the Bratislava Castle nearby, the church dominates the skyline of Old Bratislava.

Inside the church you can see the a gold-plated replica of the Crown of St. Stephen with more than 8 kilos of gold and the Chapel to St. John the Merciful whose remains are at the church. Outside the church, you can see some picturesque remains of old buildings in the courtyard and the beautiful small cobblestone streets.

Today, the St. Martin’s Cathedral is in a weird state of deterioration caused by the vibrations from the heavy traffic of the nearby Nový Most bridge. Restorations efforts began in 1998 and, since it is a national cultural monument, we don’t think it will end up any time soon.

If you walk from St. Martin’s Cathedral to Castle Bratislava, you will end up crossing the former city walls and they are worth stoping for a few minutes to take pictures and enjoy the view. 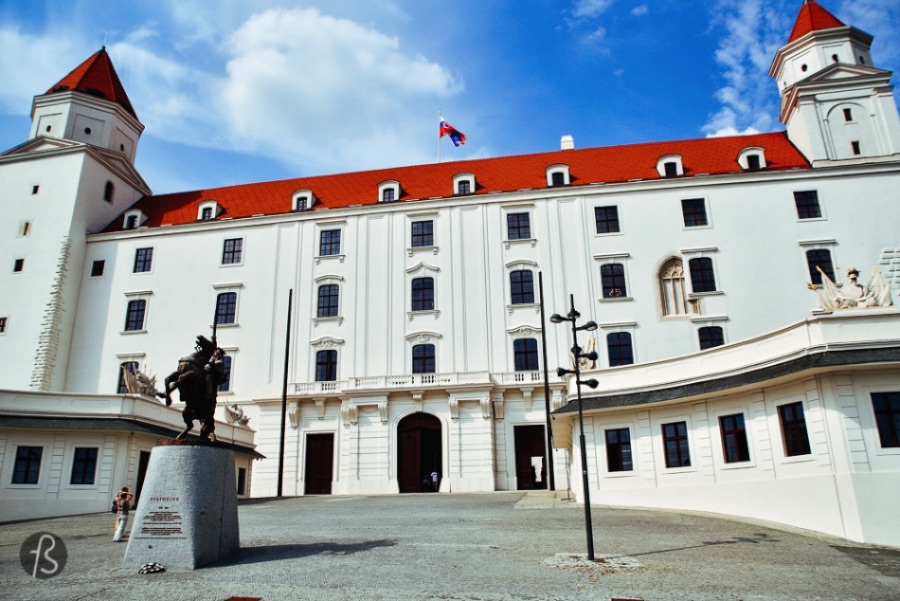 After climbing a lot of stairs up a hill, we managed to find our way onto the Bratislavský hrad. The Bratislava Castle is the main castle of Bratislava and the dominant feature of the city for centuries.

From the top of the hill, you can have a beautiful view of Bratislava, Slovakia, Austria, Nový Most bridge and the Danube and, in clear days, parts of Hungary.

Since the castle looks like it is still under reconstruction and it seems that nobody wanted to talk to us in english there, we didn’t go inside the Bratislava Castle to see the Slovak National Museum, so we cannot say anything about what is inside. Sorry about that.

But you can see a from the amazing view that you have from the Bratislava Castle. Just that view makes the act of climbing up that hill worth it.

Slavín is a Soviet Memorial situated on a hill in a part of Bratislava surrounded by beautiful houses where almost 7 thousand soviet soldiers are buried. If this is your kind of thing, you should visit this place.

This memorial and military cemetery in Bratislava was built in between 1957 and 1960 to remember the thousands of Soviet Army soldiers who fell during the Second World War while liberating the city from the occupying Nazi German troops. 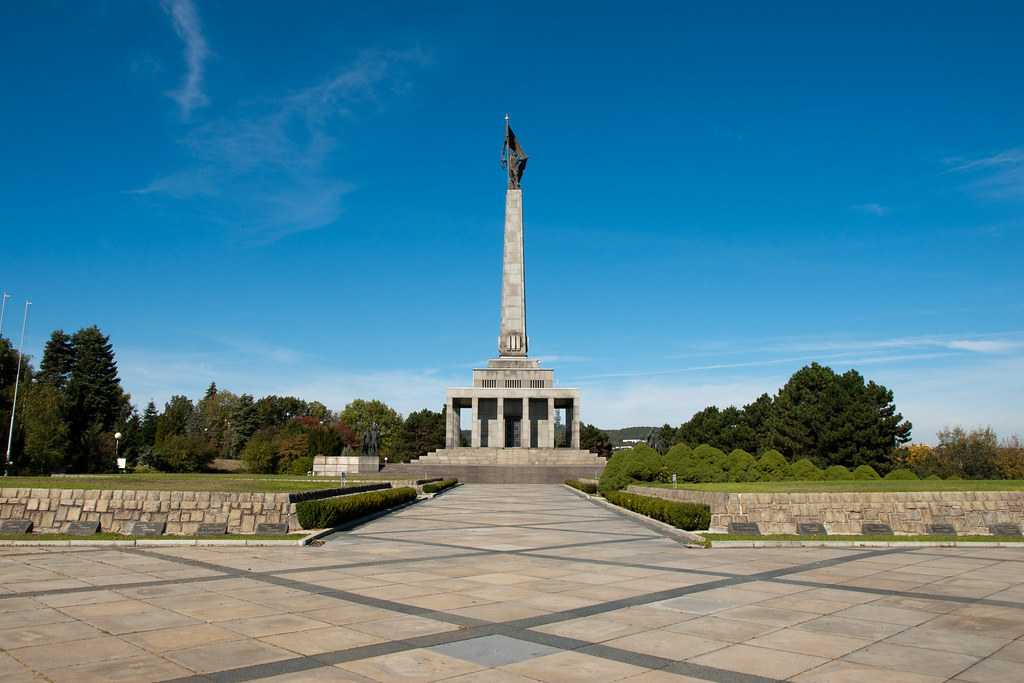 If you don’t care about Second World War history, you should add this memorial to your list of things to see in Bratislava either way. Most people visit this memorial for the great views of the city and you should do it too.

And, now for something weird… If you want to see something different in Bratislava, you should go straight to the Slovak Radio Building.

This building is an inverted pyramid that is considered by many people as one of the ugliest buildings in the world. We are not sure where we stand on this but you can think about that looking at the pictures below. 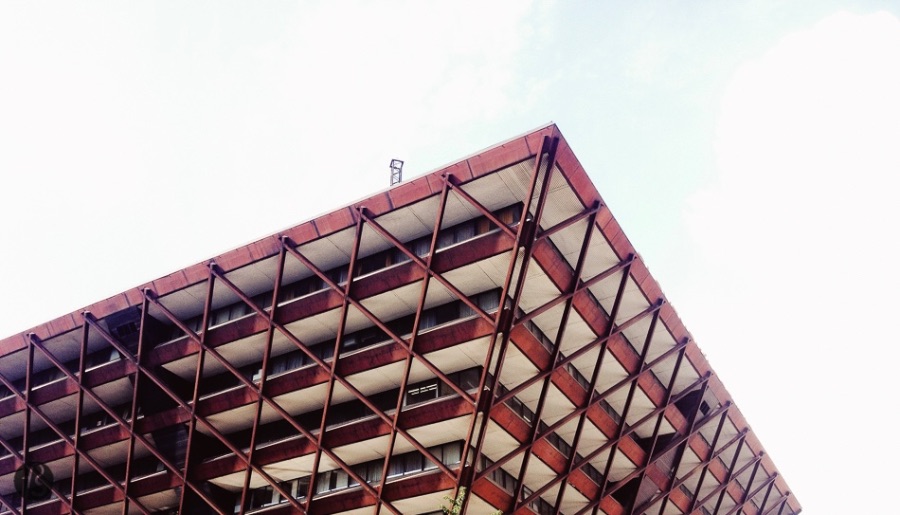 The building that host the Slovenský rozhlas stands 82 metres high and was built from 1967 to 1983 and it was projected by Štefan Svetko, Štefan Ďurkovič and Barnabáš Kissling.

Inside the building you can see a concert hall with one of the biggest organs in Slovakia. But you have to find a way in and we couldn’t. Nobody seemed to speak english and we got back to Old Town without a tour of this weird looking building.

If ater all this you still have time to see something else in Bratislava, we would advise you to just stroll through the centre of the city. Bratislava has one of the smallest old towns in Europe and this means all the historical charm is concentrated.

The streets have been renovated during the last 10 years and this brought a new life into the city. There are a lot of bars, cafés and restaurants there and we know you are going to love seating in one of those and watch people go by.

How to get to Bratislava 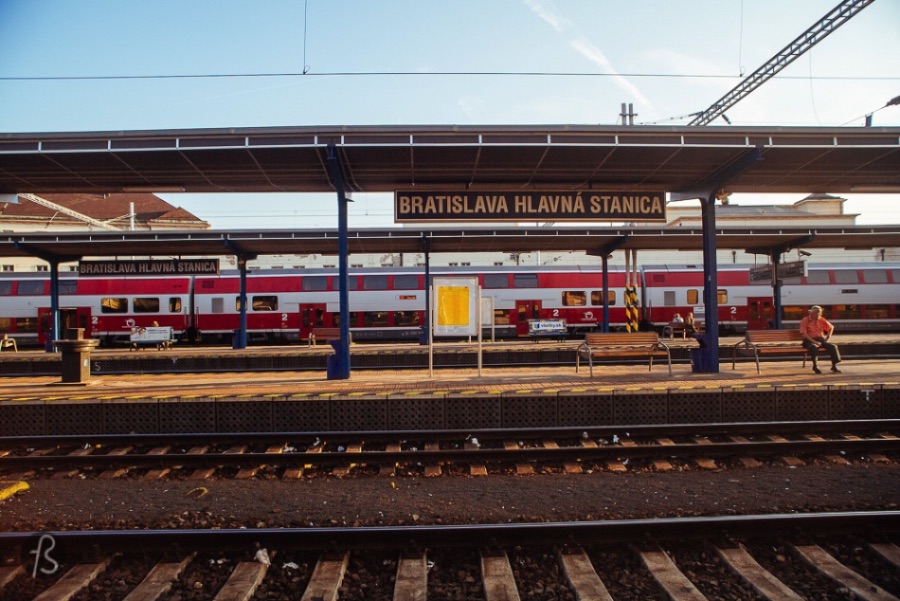 After walking in Bratislava, we decided to go back to Vienna in a different way so we took the train from Bratislava hlavná stanica to Wien Hauptbahnhof. They run in hourly intervals and are fast and comfortable. We didn’t know that but, if you get the EURegio ticket, you can use all the public transportation you may need in Bratislava for free.

If you want something different, you can go from Vienna to Bratislava by boat! It is a little more expensive than the bus and train but it might be way more fun. We still don’t know why we didn’t do this but you should! Check the routes and schedules before and go crazy. 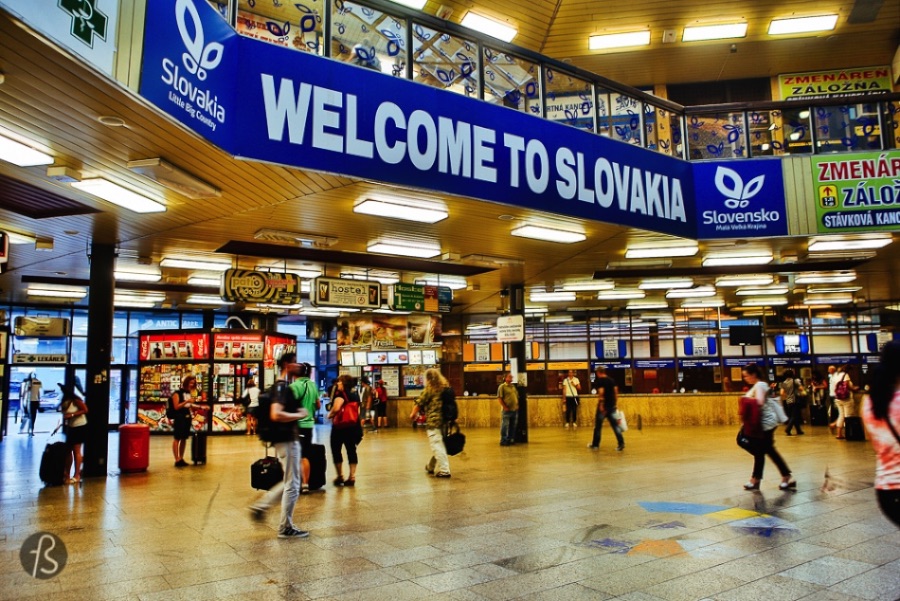 Fotostrasse was in Bratislava in August 2014 for an afternoon and we need to go there again to explore more the Slovakian capital.