The toys the world left behind
;

Close to the center of Lviv, there is a makeshift museum of sorts. This unlikely tourist spot can be found on a typical urban courtyard, but this is far from ordinary. The Yard of Lost Toys in Lviv is an unbelievable exhibition and could be described as the toys the world left behind.


I visited Lviv, one of the most beautiful cities in Eastern Europe, at the end of August 2018. When I first started researching things to do and places to visit in Lviv, one unlikely tourist spot kept popping up on my search results. Some images featured plush toys left outside an apartment building, and this was enough to capture my attention and make me look for it when I arrived in Lviv.

But why is there a yard of lost toys in Lviv? I’m not 100% sure about what I’m writing here but, according to a legend I read online, it all comes down to a man called Vacily Petrovich. The story goes that he found two lost toys on the street and, in hopes of finding whoever lost them, he placed them safely on a shelf under a small roof in the courtyard of a building.

It seems like the toys never found their home again, but they manage to have some friends since other toys began to appear next to them. Some of them were placed by Vacily Petrovich neighbors. Others were given away after children outgrew them. But nobody knows for sure what happened in this yard of lost toys in Lviv.

Today there are hundreds of plush toys, dolls, stuffed animals and plastic trucks in the makeshift museum of sorts. There is a swing set as well, and you can try to look for a toy that you used to play when you were younger. Maybe, you should even leave something for the future and be a part of this exhibition in the streets of Ukraine.

I was in the yard of lost toys in Lviv after an afternoon of rain in the city. Because of this, all the plush toys looked like they had seen better days. This made the collection of toys look, somehow, creepy and weird looking. Like I had too many eyes staring at me at the same time. It was strange but cool, in a bizarre way.

I’m not sure if this place is for everybody but since you are already in Lviv, just give it a try. The yard of lost toys is only ten minutes away from the main city square. Follow the map below, and you find it without any problem. 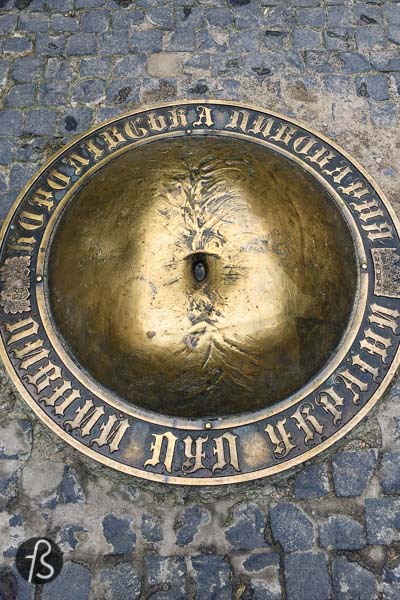 Where to find the Beer Belly of Ukraine